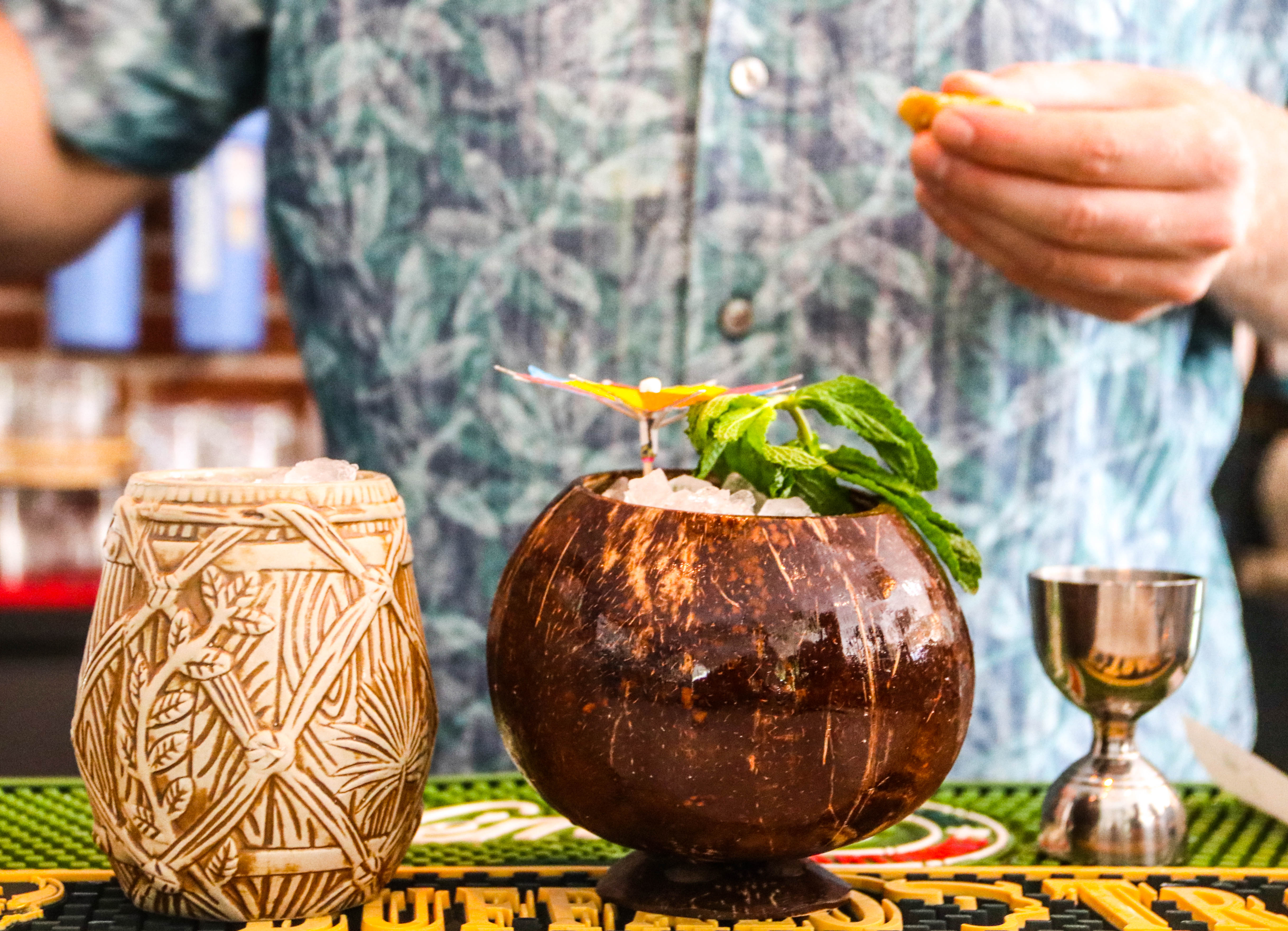 I did not respond with enthusiasm to the pitch from the PR team. Boulder’s downtown restaurant PMG, known for its wine list, was going away. Replacing it would be a tiki bar called Jungle, 2018 10th St., Boulder.

A spectacle of kitsch. And for me, a miasma of melancholy.

“Anything interesting happening with wine?”

The team replied promptly. Jungle would specialize in island wines, from places like Corsica, Sicily and New Zealand.

This stoked fresh enthusiasm, enough to persuade me to meet with the group of restaurant pros behind the restaurant.

More persuasion ensued. Jake Novotny, Jungle’s beverage director, talked about the history and glories of rum. Jungle would reject the Disneyfication of tiki.

Instead of making it all about Polynesia (a tiki is a kind of statue common across the South Pacific islands), Jungle would revolve its aesthetic around the Caribbean. Jungle takes its rum seriously; the region has dominated rum production since the 17th century. The list of by-the-glass rums reaches nearly 50, with bottles from Guyana to Martinique to Haiti.

And then Novotny offered personal reasons for his tiki passion. He first started tending bar while living in Truckee, California, at cowboy joints with line dancing and loads of people having a good time. By the time he moved to Boulder, bartenders were wearing ties and vests, and fussing over all 14 ingredients in their drinks. People waited for 15 minutes for their $16 coupes of brown liquid.

“I think cocktails got away from the guest,” he said. “To me, tiki solves that disconnect the second you walk in the door. No pretense.”

Jungle feels nothing like the tiki bars of my nightmares. It’s breezy, more sunny Caribbean beachfront bar than sepulchral den of possessed sea monsters and grass-skirted women destined for the mouths of volcanoes.

And the wine approach is ingenious. Islands produce some of the most interesting wines in the world, but they aren’t easy to find on restaurant lists, especially by the glass. Jungle’s approach forced Michael Elmore, the general manager of Jungle’s Boulder sister restaurant, Arcana, to hunt for winning island wines.

“It’s been so cheeky and fun,” said Elmore. “These islands have rich, deep histories. By learning about the history of the islands, you learn a good bit about world history. It’s the same with Caribbean islands and rum.”

Our history lesson involved tasting through a smattering of Jungle’s list, which includes about 25 wines. As a college history major who flirted with pursuing a doctorate in the subject (Medieval; would have required more Latin, plus Greek and Old German; perchance the anon that turned into a never was serendipitous Rota Fortunae at work), I can declare without hesitation that this is my kind of research.

By the end, I was hatching plans for visits to Boulder County liquor stores to score island bottles.

Ever try a wine from Tasmania? Me neither. Elmore poured a glass of sparkling rosé from the island. The winemaker uses the methodé Champenoise approach, meaning the same labor-intensive way sparkling is crafted in Champagne.

I inhaled. Strawberries and flowers. I sipped. Creamy, dry and spectacular. Mike said its texture reminds him of a piña colada. Twelve bucks for a glass, or $48 for a bottle. That’s not piddling, but by many bar standards these days it qualifies as affordable. Only one bottle on the list is in excess of $100, a Cannanou from Sardinia ($110). Most bottles are closer to $60, and glasses hover around $12.

The glass of Vidiano, a grape native to the Greek island of Crete, startled with its straightforward aromas of honey and white flowers. I’d never tasted Vidiano before, but it’s in my future. This was gorgeous wine, electric with texture and body. It even possessed whispers of smoke.

All of the wines are happy with a little bit of chill on them, including the reds. The blend of Nero d’Avola and Frappato from Sicily was utterly quenchable. I’d had this bottle by winemaker goddess Arianna Occhipinti many times, but had forgotten its ability to provoke smiles with each sip.

Jungle even has a bottle of bubbly from England. The island’s nascent and rising sparkling industry is benefiting from global warming, and I think the Brits drink most of it long before it has a shot at a cargo ship. I plan on returning for a bottle before Brexit wrecks my chances of aligning wallet with wine.

A trip to Jungle could include visits to Santorini and the Canary Islands. To Majorca and Sardinia.

Cheers, Mike. That describes the heat behind much of my passion for wine. And thanks to Jungle’s refreshing approach to tiki, I might even order a rum- and pineapple-filled drink, served in an octopus-decorated ceramic mug.

A blue cocktail with a little pink umbrella? We all forge through lives gauzed in mystery and surprise. Anything could happen.

This story first appeared in The Daily Camera.