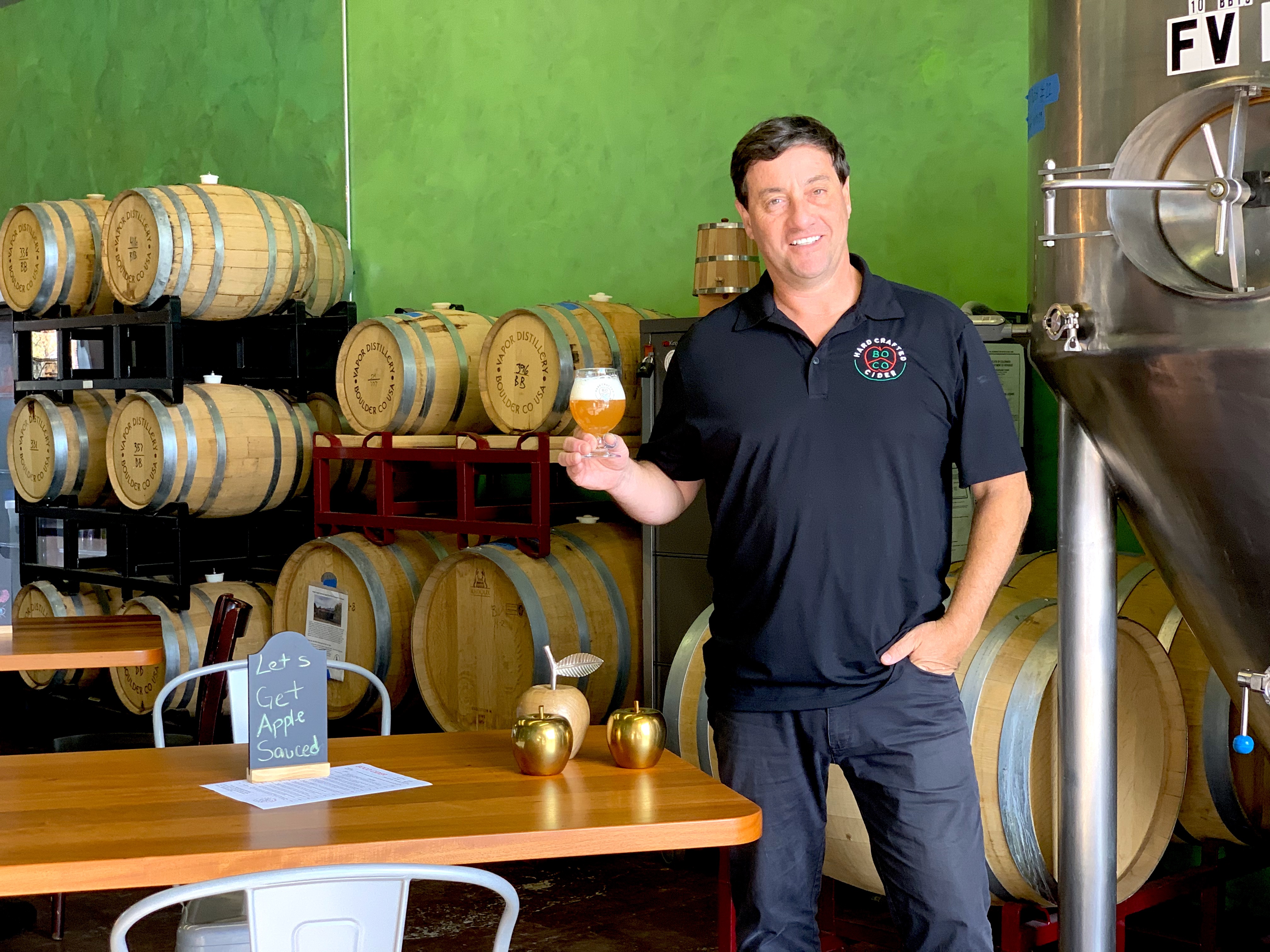 First, he was a Bay Area accounting whiz. Then a Colorado lawyer.

Stick with me here, people.

I swung by the North Boulder cidery last week to chat with Mike and try his apple-happy lineup.

Back when I first started writing about artisanal cider, somewhere around 2011, I declared I only would explore cideries that use 100 percent Colorado apples. We grow plenty of apples in the state, and I wanted to highlight local, local, local.

I quickly got schooled. Yes, Colorado does support a healthy apple industry. But most of the orchard apples aren’t meant for cider. Instead, Colorado apples fetch the big bucks getting sold at farmers’ markets and stores. They often are just too expensive for commercial cideries. And most of them aren’t proper cider apples anyway.

For many Colorado cideries, looking west to Washington is the answer for the juice. Some of BOCO’s cider does use Colorado apples, but the majority relies upon Evergreen State fruit.

But then comes the Centennial State craft. And here, BOCO shines.

Belochi started making cider a few years ago. Visits to Belize had introduced him to people turning tropical fruit into alcoholic beverages, but many didn’t really know what they were doing — they winged it every time. Belochi thought if he could learn to make cider with simple equipment and techniques, he might help Belizeans create successful businesses.

His first year of cider-making leaned more towards vinegar than proper beverage.

The second year, things got better. The third year, the neighbors who suffered through year one and yawned through year two kept knocking on his door. Got any more of that cider?

So Belochi got licenses, found space in North Boulder, bought fermenting tanks and everything else he needed to open a welcoming place for cider sippers, and commenced transforming juice into heady adult beverages.

“This is a fun project that I hope to turn into a serious business, and I want to do it the Boulder way,” said Belochi, who was born in Tunis in Africa, but raised in California. “We have places like Celestial Seasonings and White Wave that did it right from the beginning. I keep this as natural as possible. No extracts. No sulfites. Zero fining agents or artificial colors. My juice is not pasteurized, and I do not add carbonation. We depend on natural carbonation.”

I have tasted my way through dozens of Colorado ciders since 2011. I think Belochi’s are among the best.

Artisanal ciders “shrink from the saccharine”

Some domestic hard ciders, like Woodchuck Cider and Angry Orchard Hard Cider, taste as sweet as soda. I avoid them. Craft cideries began emerging in the 2010s, and they generally look towards Europe, specifically England, France and Spain, for inspiration. Many of the Euro ciders offer a pleasing funk. With the exception of some mass-market ciders, particularly from England, the Euro-style is dry.

Artisanal domestic ciders shrink from the saccharine. But too many, for my taste buds, lean too far away from sweet into mouth-puckering sour. And due to their sharp qualities, complexities vanish. All you taste is tart apple spritzed with lemon.

Belochi has found a pleasing balance. His ciders do not broadcast the funk that I treasure in ciders from places like Normandy and the Basque Country. But that’s OK. The balance is spot-on. This is cider to savor.

BOCO’s commitment to “the Boulder way” is key, I think. Unlike some of the better-known Colorado ciders, which often taste one-dimensional to me, his offer layers of flavor and texture.

Natural carbonation is important, I think. Most brewers and cider makers let their batches complete fermentation before filling bottles and kegs. To get the fizz, they add carbon dioxide.

Belochi rejects the approach. Instead, he adds a little bit of fresh juice back to each keg. When the yeasts in the cider meet the juice’s sugars, they begin gobbling up the sweet treats, and creating carbon dioxide as a byproduct.

The result? An effervescence that somehow is velvety, rather than the parade of pinpricks that normally accompanies fizzy beverages.

The cider in his kegs is alive. If you take it home in a growler, it’s alive. Stick it in the fridge, to inhibit continued fermentation. Leave it out on a counter at your own risk.

“Natural carbonation is the hardest thing we do,” said Belochi. “Sometimes we have to open kegs and just let excess C02 run off. There is an element of chance to this method.”

I tried a dozen of his ciders, from one infused with mango and hot peppers to a classic English-style and a few aged in American oak barrels. Not a single cider disappointed, including that mango-and-pepper number.

Yeast is important in shaping flavors in fermented beverages, and Belochi leverages them. His excellent English-style takes advantage of a strain of English yeast, while also using juice from heritage Washington apples.

The “Petrichor Cascade” cider applies Champagne yeast to Palisade apples and hops that Belochi picked himself in a neighbor’s yard and dried in his garage. Bonus points to Belochi for naming his cider after petrichor, a beautiful word that describes the smell that accompanies the first rain after a dry spell.

I fully embraced his MORP Malus, made from apples that are part of the Montezuma Orchard Restoration Project (MORP) out in Colorado’s Montezuma County. This delight used Champagne yeast, and sat in oak barrels before getting kegged.

Even his Mumpkin, which dwelled in the land of pumpkin spice, won me over. The cider took advantage of Munson Farms’ roasted pie pumpkins, cinnamon and nutmeg.

One sip of Mumpkin, and I understood at least one beverage that would accompany our Thanksgiving table.