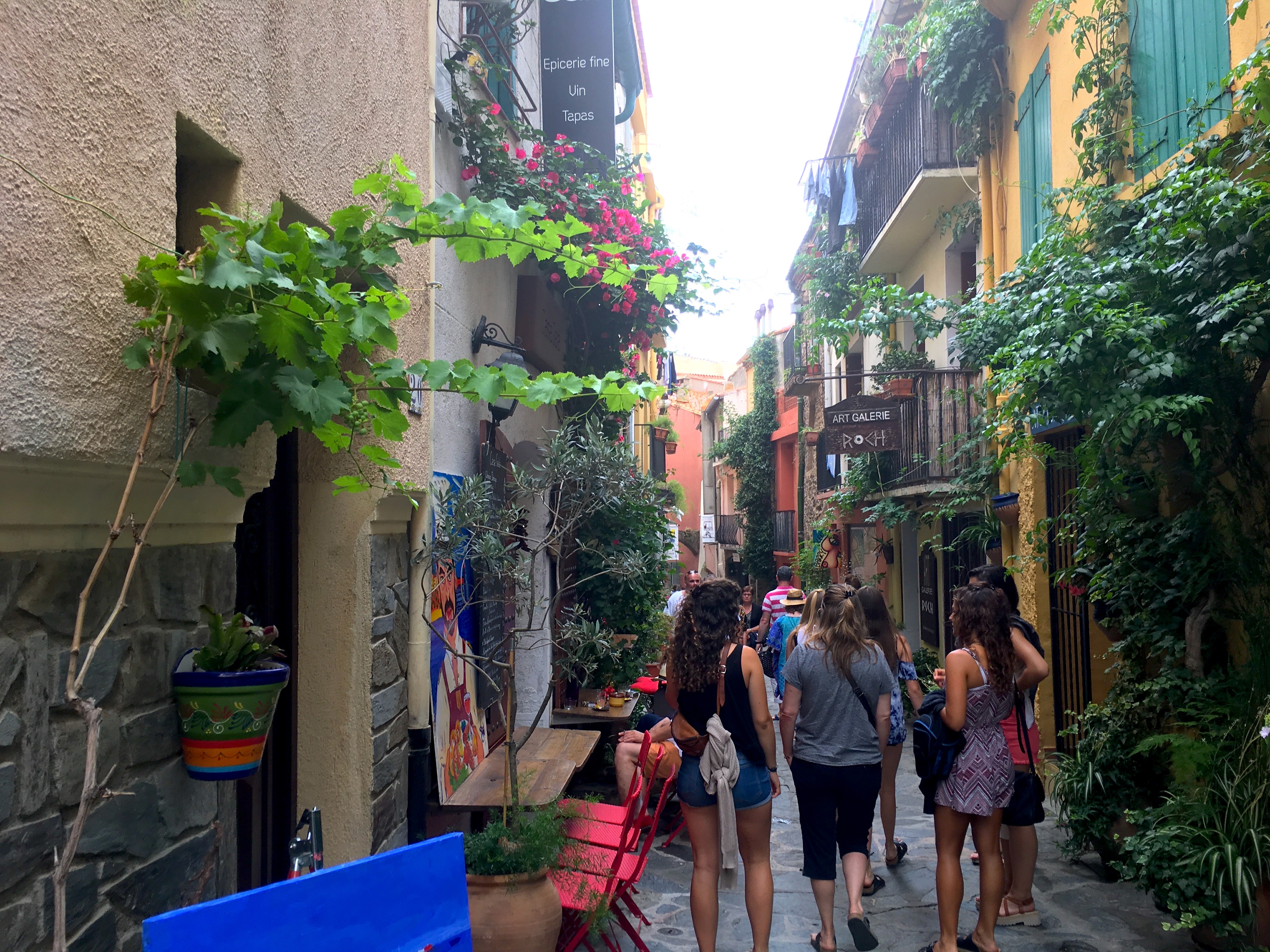 The trip to the seaside town of Collioure in Roussillon, just across the border from Catalunya, was not especially eventful — a fair bit of driving from our base in Girona, Spain, with my rental car’s English guide steadily commanding me to “take the second exit in the roundabout”; a ramble through the hilly, cobblestoned village of shops selling pastel linens; a poor lunch for my first (and only) meal in France. Later we spent a few hours in lounge chairs on a beach backed by stark, concrete-block hotels and apartments that seemed empty, almost Soviet. The chairs and cabanas required payment, but we understood this only as we began driving away and somebody in a uniform began waving at us. We didn’t stop.

Eighteen months later I found 2014 Les Clos de Paulilles Rouge on sale at a big liquor store in Boulder. Upon seeing the word Collioure emblazoned across the bottle’s bottom, I bought two cases. Note: The bottles were less than $10.

The price helped, but it was the word — Collioure! — that compelled me to haul home 24 bottles. For what months earlier unfurled as a middling day had ripened into a comic memory, and a touching one. Upon encountering wines from the AOC, on deep discount, compulsion took over.

The France day had punctuated a captivating week exploring Catalunya’s steep mountains and its wild coast. The ancient city of Girona, where he had rented an Airbnb for much of the vacation, enchanted us all: Annie, my daughters Stella and Ruby, my mom Melinda and me. The quick jag into France’s Pyrénées-Orientales region contained its small parade of mild disappointments, but between them we joked and snickered.

The English guide. My obsessive-compulsive hunt for canned, salted anchovies in what I had read was the anchovy capital of France (I failed). The stereotypical dismissive waitstaff at the touristy, outdoor restaurant. The afternoon on the spare, wind-blown beach in our shaded, hijacked seats.

Through it all, we laughed. My mom, especially.

I don’t think many products other than wine (what else will I encounter from Collioure, with the possible exception of canned, salted anchovies?) will ever deliver me straight back to that loose, wayward day of subtle merriment.

And so I approached my first inhale of Les Clos de Paulilles Rouge with bias. I wanted to love it.

Stewed prunes, bruised plums, raspberry jam. A waft of holiday spices. Something herbal — marjoram. Earth, but not forest floor, mushrooms or cedar. More like desert soil just after a rain. A pinprick of heat, the mild kind you get from young arugula. Some burn from alcohol, too.

On several tastings I wrote “raspberry truffle, minus the sweet.” The chocolate part of the note describes the texture on the tongue rather than flavor. In another note I wrote, “Gorgeous, luxurious. Multi-dimensional fruit. It’s like the glass has a variety of fruits, and some of them are fresh, some are stewed, some are jam.”

These are good things.

The grapes in the classic blend from this region of France— Grenache, Syrah and Mourvedre — take to the sometimes searing, dry climate which gets raked by the Tramontana, a blistering, dessicated wind. Another climate event, called the Marin, often delivers cool, humid winds spritzed with sea spray during harvest. Together they race the grapes towards ripeness with heat and sun, but then apply brakes. These, too, are good things.

Like every other wine, it has its place. Five o’clock on a hot July day after working in the garden? It’s too much. Apres ski, with cheese, bread and a big fire? A fall meal of pasta with winter squash, sage and browned butter? Duck? Perfect.

Les Clos de Paulilles Rouge’s place for me might range further than for most. Anything that carries me back to memories of the five of us laughing for hours as we rambled across southern France is something worth embracing often.